A drow scorpion chain resembles a regular spiked chain in many respects, but is slightly longer than a normal spiked chain and features a daggerlike blade at each end. The drow of Xen’drik have perfected the use of this weapon to harass larger enemies such as giants, or as a poison delivery system against less hardy foes. The weapon takes its name from the technique of holding a length of chain behind the back and then flipping it over the head to strike a foe; drow warriors often open combat with this maneuver.

A drow scorpion chain has reach, so you can strike opponents 10 feet way with it. In addition, unlike most other weapons with reach, it can be used against an adjacent foe.

Because the chain can wrap around an enemy’s leg or other limb, you can make trip attacks with it. If you are tripped while making your own trip attempt, you can drop the chain to avoid being tripped.

When using a drow scorpion chain, you get a + 2 bonus on Combat Maneuver Checks made to disarm an opponent (including the roll to avoid being disarmed if such an attempt fails).

You can use the Weapon Finesse feat with a drow scorpion chain, even though it isn’t a light weapon.

A drow scorpion chain counts as a spiked chain for the purpose of feats such as Weapon Focus, Weapon Specialization, and the like. 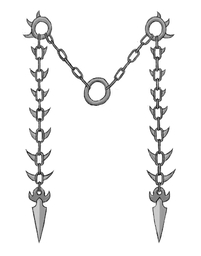