In the first days of the empire, Jhazaal Dhakaan created the great horn Ghaal’duur to ring out on the field of battle, signaling the downfall of the enemy. This horn is one of the greatest relics of the empire, and if one of the warlords of the Heirs of Dhakaan could acquire it, a number of the remaining clans would surely flock to his banner.

Ghaal’duur is carved from the tip of the horn of a red dragon. To use it properly, a character must have at least 12 ranks in Perform. A bard who sounds the horn receives a +5 bonus on all Perform checks involving music. The saving throw DCs of bard spells or bard spell-like abilities used in conjunction with the horn are increased by 3, and all bard spells are enlarged and
extended as though by the Enlarge Spell and Extend Spell feats. Finally, when a bard uses his inspire courage ability, the morale bonus is increased by +2 and the ability is effective out to 1,000 feet; in addition, all enemies of the bard within 1,000 feet take a –2 morale penalty on attack rolls, damage rolls, and saving throws against charm and fear effects. The bonuses and penalties are doubled against goblinoid targets.

Ghaal’duur is probably buried deep in Khyber, in one of the vaults of the surviving daelkyr. It is said that only the fire of Jharaashta, the dragon who sacrificed his horn for its creation, can destroy the horn. But after nine thousand years, most sages assume that the mighty dragon is long dead.

The horn is 3 feet long and weighs 14 pounds. It is banded with adamantine and covered with goblinoid runes. The inscription in Goblin reads, “A mighty dirge for the fallen foe.” 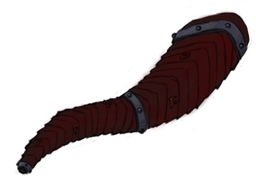