A single piece of forged metal makes up the grip, guard, and blade of this weapon, which has a crescent blade on the outer part of the guard and a hook on the end of the blade. The end opposite the hooked blade forms a daggerlike spike that can be used for stabbing. You can strike with the crescent blade or the long spike, dealing the lower damage die for the weapon—piercing damage or slashing damage respectively. The long, hooked blade of the weapon deals the higher damage die as slashing damage.

With a hook sword, you get a +2 bonus on opposed attack rolls made to disarm an enemy (including the roll to avoid being disarmed if such an attempt fails). A monk who is proficient with the hook sword can treat it as a special monk weapon. 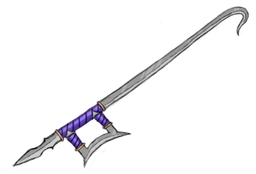