Pen of the Scribe

This long ink pen, formed of silver and copper with a thin dragonshard at its core, is an invaluable tool for the scribes of House Sivis. In the hands of a character with the Mark of Scribing, it has the following powers.

Requirements Craft Wondrous Item, illusory script, creator must have the Mark of Scribing.

Pen of the Scribe 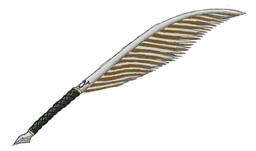