A common warforged component, vanguard treads provide speed and stability to a warforged fighting amid the rubble and carnage of the battlefield.

Description: Vanguard treads appear to be oversize metal boots with spiked, treaded soles. Their most impressive feature is their sheer size—they look big enough to fit a heavily armored ogre.

Along the top cuff is a row of inset amethysts that seem to glow a bright purple whenever the wearer runs, charges, or resists a bull rush.

Prerequisite: Vanguard treads are embedded warforged components, so they function only for warforged characters.

Effect: Your vanguard treads provide you with superior traction and stability, which has the following game effects:

If the terrain deals damage (such as the burning ground on the plane of Fernia), you still take that damage. The massive spikes and treads on the soles of your feet leave a distinctive trail. Anyone following you gains a +8 circumstance check on the Survival or Perception checks made to track you. 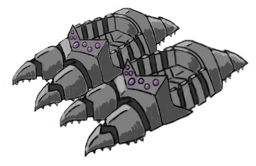